Encouragement Ideas
NBS2GO
113 Hits
0 Comments
Take a driveway, several adorable children, a few bed sheets, some hockey sticks, a couple of bathrobes, and twine...what do you get? Bethlehem on My Street!

I have no formal training in play directing. I have never been to acting school. I have never been taught the skills of designing costumes. But, I do have a heart for children and I do have a heart for the story of Christ to be shared. A few years ago, I decided to have a nativity play...in my driveway. I love seeing neighborhood children have the spotlight right where they live. Instead of asking friends and neighbors to come to our local preschool or church we asked them to come around the corner. I had no idea who would come or be interested, but I wanted to try. We had one rehearsal. One. The small children had one or two lines each. The narrators held the words in their hands and read from papers. We had angels, shepherds, and a baby Jesus doll. We had a bale of straw. We had small puppets.

The afternoon of the play came. It was the coldest day of the year. One neighbor came, then another, then another. At last count 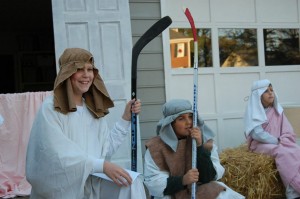 50 neighbors stood in our driveway to watch the 2,000 year old story being told.

A hush came over the crowd and a little voice said, “Today, in the city of David, a Savior has been born. He is Christ theLord.” Several of us became misty-eyed as the children of our neighborhood once again proclaimed the miracle of “Immanuel, God with us.” It lasted 15 minutes and was absolutely, indescribably simple and profound all at the same time.

I have included in this blog my simple play script. All you need is a few children and small bit of faith. God will do the rest! May He be proclaimed right where you live!

Welcome: Narrator #1: King of Kings, Lamb of God, and Lord of Lords...these are the names that speak of the one true God. Today we are gathered to celebrate and bring honor to the One who is the King of Kings, the One whose name is above all names...Jesus Christ.

Narrator #2: Today we will share with you the true story of Christmas. This is the story of God the Father, God the Son who is Jesus, and God the Holy Spirit. God the Father made the heavens and the earth and all living creatures. He created us to have a trusting relationship with Him. When man sinned against God everything in the life of man changed. Most importantly the relationship between God and man was changed forever.

Narrator #3: No longer could imperfect man live in the presence of a perfect holy God. Because of sin, man was separated from His creator. But our God is loving and good. On the very day that sin entered the world, God promised He would send the World a Savior...

Narrator #1: This Savior’s name is Jesus. He would come and save the world from sin’s penalty, death. Those who believe in this Savior would not experience separation but would be forgiven of every sin against God. God’s promises were spoken through the prophets.

Narrator #2: “But you Bethlehem, though you were small among the clans of Judah, out of you will come for me, One who will be ruler of Israel, whose origins are from old, from ancient times.” Micah 5:2

Narrator #3: “This is the promise I will make with the house of Israel after that time, declares the Lord. I will put my law in their minds and write it on their hearts. I will be their God and they will be my people. For I will forgive them and remember their sins no more.” Jeremiah 31:33-34

Narrator #1: “For unto us a child is born, to us a son is given, and the government will be on His shoulders. And he will be called Wonderful Counselor, Mighty God, Everlasting Father, Prince of Peace.”

Narrator #2: “Therefore the Lord Himself will give you a sign, the virgin will be with child and will give birth to a son, and will call Him Immanuel.” Isaiah 7:14

Narrator #3: God spoke through man regarding the One who would come to save the world from sin and suffering. The world looked for this King of Kings who would reign over His people...little did they know or understand that this King would come as a little baby in to the world...listen and hear of His humble beginnings

Narrator #1: This is Mary, a girl of Galilee. She lived long ago, but such a wonderful thing happened to her that we remember her and love her still. (Mary walks forward and stands in the center facing the audience.)

Angel: You are blessed among women, for you shall have a son, whom you shall name Jesus. He shall be called the Son of God and His Kingdom shall never end.

Mary: I am a servant of the Lord. May it be as you have said.

Narrator #2: Mary married a man from Nazareth. His name was Josephand he was a carpenter by trade. (Joseph enters and stands next to Mary.)When Joseph had to go from Nazareth up to Bethlehem in Judea, to pay his taxes in his father’s town; Mary went with him. It was a long, weary journey for her. When they reached Bethlehem at last, they found many travelers there before them. The streets were full of cheerful, jostling kinsmen.

Narrator #2: The inns were crowded. Joseph went from inn to inn in search of a room.

Inn Keeper: We have no room.

Joseph: (Walk over to next door.) I need a room.

Joseph: (Walk back to center knock on door.) I need a room.

Inn Keeper #3: We have room in our stable.

Narrator #3: Though Joseph asked shelter only for his wife, every innkeeper turned them away. Joseph continued to search and at last one innkeeper, seeing Mary’s weariness and need, showed them to a stable full of warm sweet hay. There Mary brought forth her son (Mary picks up baby). She wrapped Him in swaddling clothes and laid Him in the manger, since there was no room for them in the inn. (Mary holds baby close and places in manger.) Mary and Joseph were not alone in the stable (Puppets await cue and pop up one at a time.)

Cow: What is that in my manger?

Donkey: Not what friendly cow, but who!

Donkey: This is the very Son of God. His name is Jesus. He is the King of Kings and the Savior of the world!

Lamb: Let’s all sing “Away in the Manger.”Piano and singing (while shepherds and angels go backstage.)

Narrator #1: There were in that same country shepherds in the field keeping watch over their flocks by night. “An angel of the Lord (Angel steps forward looking at shepherds) appeared to them in shining glory and they were all afraid. But the angel said to them...

Angel: Do not be afraid.

Narrator #1: ...which is always the first thing that angels say.

Angel: I come to bring you good news of great joy which shall come to all people. Today in the city of David a Savior has been born for you.

Narrator #1: The angel went on to say that they would find the babe wrapped in swaddling clothes and lying in a manger. Suddenly the sky was full of angels (enter younger angels) praising God and saying...

Younger angel: Glory to God in the highest and peace on earth!!

Narrator #2: When the angels disappeared into heaven, the shepherds said to one another, (shepherds huddle speaking to each other), “Let us go to Bethlehem and see this thing which the Lord has made known to us.”

Narrator #3: They hurried to the town and found Mary, Joseph, and the babe lying in the manger. Afterwards the shepherds ran and told everyone they met about the child! (Go shepherds...run and tell.) Let’s all sing Silent Night. Piano and singing...

Narrator #1: This child was called Jesus the name given by the angel before He was born. Jesus grew into a man and did what no other man was capable of...he offered forgiveness with God. Jesus said “I am the way, the truth and the life.  No one comes to the Father except through me.”  John 14:6  He was fully man AND fully God.  He came to save us from the penalty of sin, which is death.  He came to give us meaning and purpose in life.  Christ came to change lives.

All children quote...”For God so loved the world that he gave his only Son that whoever believes in Him will not perish but have eternal life.” 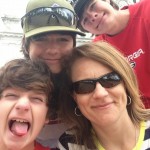 Joan, with three teen sons and one preteen girl under her roof, is thankful for her husband and naps. Between laundry loads and fixing beef you might find her in the McDonald’s drive thru ordering a coke with extra ice and a chocolate chip cookie...because this is her happy place.
Facebook Twitter Pinterest
Tags:
A Play Children nativity script neighborhood Performance The Christmas Story The Nativity
Tears Filled Her Eyes: Fresh Idea for a Sweet Vale...

The Joy of "Unanswered" Prayers

The One Question That Revolutionized Loving My Neighbors

How To Plan An Egg Hunt