I Couldn't Hold Back the Tears

Uncategorized
NBS2GO
398 Hits
0 Comments
I love to have neighbors in my living room, talking about God's Word together. With that desire, I've repeatedly sent out fliers, knocked on doors, hosted a "tea party" and sent out emails inviting people to join me in a Neighborhood Bible Study. On my first attempt, I was so excited! I prayed and planned and prayed some more. I had all the food ready, and I waited to see who God would bring.

I waited, but no one came.

Looking out the window, I couldn't hold back the tears. The Lord had prepared me for that moment with the Scripture, "Whatever you do, do your work heartily, as for the Lord rather than for men, knowing that from the Lord you will receive the reward of the inheritance. It is the Lord whom you serve." (Col.3‬:‭23-24‬) It was comforting but still disappointing. 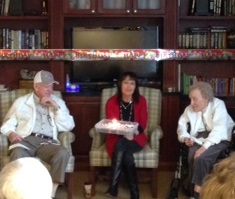 Through the years, I tried again. Sometimes, I only had a couple of people come. I'm fine with small numbers because it promotes greater intimacy, but often it seemed that I was reminding them of the importance of doing homework or working around scheduling conflicts. It felt like I wanted it more than they did! Although I've made great friends, and I truly believe many have been helped, I often found myself frustrated.

After my 94-year-old mother-in-law died, God made it very clear that He wanted me to teach others the way to Heaven. When I asked Him, "Who, Lord?" I "just happened" to be driving by a senior home not far from my neighborhood.

He asked me, "Who do you know who is on the brink of eternity?"

Just as I was about to answer that I didn't know anyone, I glanced at the senior living home. Then I knew that was where He wanted me to spread the Good News!

I've been teaching at the home for more than two years now. We started with five to 10 people in attendance. Later, when God answered my prayers for helpers, we began to get pretty tight in our little library room. I asked my husband to pray and ask if we should move out of that room. I was hesitant because I didn't want to lose the intimacy, and their attention spans were already difficult to capture!

My husband told me the Lord had given him one word: Spillover.


Later that morning, when I arrived at the senior home, the library was blocked off. Workers were cleaning up the mess from a water line that had burst and "spilled over" into that room! I moved our meetings into the community room, where we now have 20-35 people attending regularly.

They love to sing and listen, and I love them with a love that is God-birthed.

Sometimes I still question the Lord because of my great desire to dig into the Word with like-minded believers, but God continues to reassure me in various ways that this is His plan. One of my workers will tell me that the message I gave was exactly what he or she needed or I get to pray with a senior who just lost a loved one. Best of all, I get to participate as one of my precious seniors makes the decision to accept Jesus, and their whole eternal destiny changes!

One day, as I was explaining this to a friend, she asked me a thought-provoking question.

Who is your neighbor?

Then it hit me! These seniors are my neighbors, and they're in need of the Good News just the same as anyone whom the Lord places in my path. The Scriptures tell us, " Blessed are the feet of them that bring Good News." (Rom.10:15) I'm thankful to be part of the Great Commission and to faithfully build His Kingdom, not mine.

Who is YOUR neighbor? Share one step you could take today toward sharing the love of Jesus with him or her.

Josie Pawlowski works part-time as a barista for Starbucks, but her real love is spending as much time as possible with her six adult children and nine "grand ones," as she fondly calls her grandchildren. She also loves to visit the elderly every Friday, singing the good old Gospel hymns and bringing a message of hope and salvation to those in the final season of their lives. In addition, she loves to pick flowers from her own garden "to bring a little of God's beauty" into her home or that of a neighbor. Josie was born in the Netherlands and became nationalized in the bicentennial year. She was raised in Grand Rapids, Mich., and moved with her husband in 1998 to Atlanta, where she lives her life to the fullest to the glory of her Savior.
Facebook Twitter Pinterest
Tears Filled Her Eyes: Fresh Idea for a Sweet Vale...